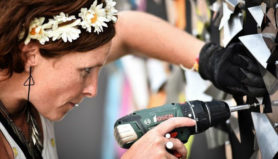 Born and raised in the high mountains of Savoy, Mademoiselle Maurice is a French artist who doesnt really like “spirits in boxes” but prefer rainbow and their spectrum colors… Actually based in her new rooftop wood studio in Marseille, the essence of his actual work was born after living  in Japan.

Following this year in the country of the rising sun, and the tragic events of 11 March 2011 (earthquakes, tsunami and nuclear power plant explosion of Fukushima) while living in Tokyo, she decided to start composing its artistic and urban works in connection with these facts.

It is based on the legend of 1000 cranes and Sadako’s story, a little girl who lived the tragedy of Hiroshima.

Now based in south of France, mooving between Haute-Savoie and other locations, Mademoiselle Maurice develops and creates in her studio colorful works  with the fruits of a rich influences and career lessons.

Each work refers to a militant act. Questioning on the human-Nature link, open criticism of the consumerist system and of some of our acts: pollution, inequality, racism, homophobia. A quest for common sense, the greening of cities, solidarity, ethics, sustainability … At least try at a small level.

Via paper, paint, metal, or other mixed media and recycled stuffs, she gave birth to works in tune with their daily lives.

These fetishes medium are paper , threads and all kind of recycling stuffs, she loves to shape these natural materials in a complex manner.

Rising from the city grey, so was born a nebulous breaking works with urban monotony. Real punctuation of the city as his life’s work of this young artist imaginative displays radically outside the walls of his workspace.

These openly positive creations, ultra colorful and immediate demands, emanates a carousel of emotion or everyone is

echoed his own sensibility.

Light in appearance, the work of Mademoiselle Maurice propose and raises many questions about human nature and the interactions that sustain people and the environment.

Some countries where Colors and Paper has been:

The only walls which stay “forever” are:

Post-Sciptum: So many messages about why these colors or this shapes…References to Greenpeace , Nelson Mandala, LGBTQ . And so many to tell about why accumulation, dispersion, density: For questions contact the artist or read the many interviews via books or internet :)